CLOSE YOUR EYES AND ENTER THE STEAM. 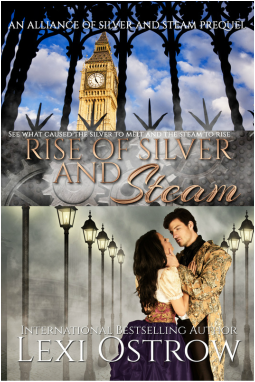 Thomas Agardawes has a bride that resists him and a job that he doesn't like. When a Royal approaches him on only his third day as a master at the clock worker guild his life is turned upside down. Demons lurk in the underground and because of his wife’s secret affair with an angel he is being assigned the task of leading the force against evil.

Seraphina has torn her wings from her body to save a lover’s soul and he rejects her. Revenge blossoms and she plots to make Hell her own and force humans to pay for what they took from her. Nothing will stop her and her corruption runs soul deep.

Layel, a Pure Angel, has fallen for a human and it’s almost cost him his wings. He must convince the woman to love her husband and convince the husband to run a secret group to hunt demons as they’ve come out of Hell to hunt the humans.

Three souls that couldn’t be more different collide in unexpected ways as the Alliance of Silver and Steam is born and the secrets of demons unleashed on the world. 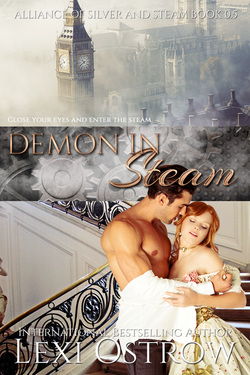 In the London Underground the Alliance of Silver and Steam is all that protects humans from demons.

Felicia Ganon is no stranger to the demons that lurk in the night. After her parents were murdered in front of her the Alliance took her in and trained her. Vengeance became her only drive.

Greyston Westham is more than just the devilishly handsome Captain of the Guard. He's an Incubus Demon who hunts his own kind because they have no use for lesser demons like himself.

When a murderer is running lose that only the Alliance can deal with Felicia and Greyston are thrown together in a deadly game. Can she overcome her hatred of demons and give into the relationship that will save her life? Or will Felicia's hatred be her doom. 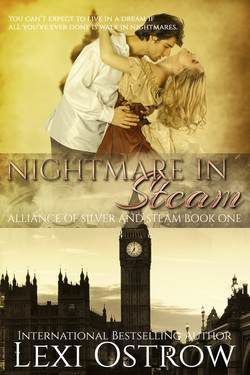 Eliza Kempe Dorley is always left in the background. As a female, being top inventor for the Alliance of Silver and Steam has as many draw backs as perks. She’s in charge of the creation of the many tools the Alliance uses in pursuit of the demons that run lose in the London Underground, which means without her, the demons would be harder to put down. It also means she misses all of the action and has never had the chance to really use any of her inventions.

Lucius Cooley Willan is a Nightmare Demon with a penchant for gambling and sleeping with women he shouldn’t and it’s landed him in hot water. Now he spends his nights slinking in humans dreams and unleashing terrors so strong it kills them so he can capture their soul for his boss. But when he’s ordered to attack the group that hunts his kind he’s enthralled by the feisty inventor he comes upon.

Eliza’s victim to Lucius in a way no others have been, a sensual dream that she can’t shake when she wakes up. When he bumps into her at the trains she’s an addiction he can’t shake. When he outright disobeys the demon who controls him for some out of dreams interactions with the Eliza, it will be up to him to save her from the nightmare he’s put her in. 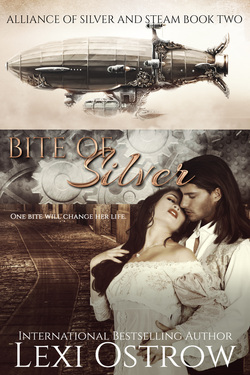 Philippe Clemis is The Alliance of Silver and Steam’s best hunter. He’s killed hundreds of the vile demons and kills without remorse. When Odette shows up back in London after her family was slaughtered he’s assigned to get her reacquainted with guild ways - he’d rather be cleaning up the toilets. The obstinate female drives him crazy and makes him mad with desire because she challenges him in a way no one ever has.

When a Kappa Demon attack on Philippe claims Odette instead the pair will have to work together to stop her transformation into the vampiric little demon.  A journey across Europe and into hell itself to find a cure will force the pair to determine if what they feel is love or hate if they are going to make it back alive. 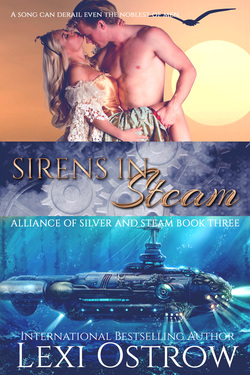 A song can derail even the noblest of men...

McKenna Caffry learned about demons when they attacked her carriage a little over one year prior. Now she’s finished her training and is ready to prove her worth to the people that changed her world. She’s not thrilled with her first mission - watch over the Royal on a mission to rescue captured Alliance member, Kellan. Being a nanny was not what she joined the Alliance for and none of the others on the mission had been given such a lowly task. It doesn’t help that his smile sends waves of lust through her every single time.

Jacob Tresay III is one of many bastard sons of the King. As a distant Royal living in court he is exposed to the knowledge that demons run amuck in the London Underground, and all over the world. When his father demands that a Royal be present on a rescue mission he volunteers for the job to get out of court. The open seas awaited him, if he could only shake his personal Alliance assigned guard, even if McKenna set his body on fire.

Finding one of few open entrances to hell will take them to the middle of the sea. But what awaits them when they find the entrance is the most dangerous thing a sailor can encounter, Sirens. McKenna and Jacob must see what passion lies between them if they are going to make it past the sea demons and rescue Kellan. And themselves. 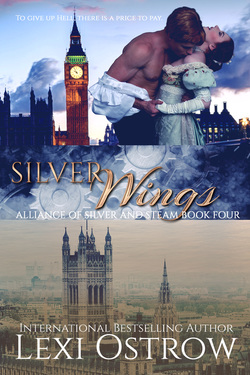 
Seraphina has been the Queen of Hell for over a hundred years after purposefully tearing her wings from her back and becoming a Fallen to save her love. When he scorned her, she turned to vengeance against humans for their part in her world unraveling. For years she had sent attacks after the Alliance of Silver and Steam hoping to stop them so she could finally invade the world above Hell. When she spends too much time with her prisoner, Kellan, her mind becomes jumbled and when fate intervenes she quickly loses control of her priorities.

Kellan Doughlas had been a prisoner in Hell for over a year. He’d been kept alive on Fallen blood and the addiction to it would kill him and his friends. The real issue was who had been feeding him - Seraphina. Along with an addiction for her blood she left him with longing and desire for her, one that infuriated him because he should only hate her. Unable to stop himself he flees the guild and goes to Hell to try and kill her.

When Seraphina and Kellan collide a second time both are prey to a fated event that they cannot undo. But laying down her weapons and leaving the fight isn’t easy for Seraphina, and Kellan has no desire to join her side. Humans had taken so much from her, and demons had taken so much from him. One person wasn't enough to change their futures. When their passion ignites Seraphina’s army of Fallen take matters into their own hands to end the long war. They must make a choice, their forbidden connection or their people. 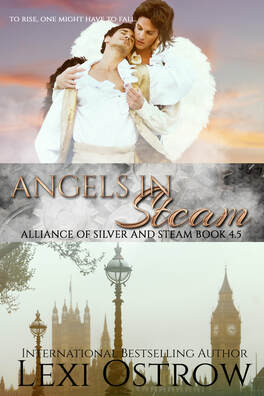 
Layel has been the stoic leader of the Pure Angels since before he can remember. His life has been a series of temptations, all of which he'd barely maintained his wings over. Joining forces with the Alliance of Silver and Steam had only continued to push and test him.

Nathaniel's wings are turning black.He'd murdered an innocent human that had happened upon him during a rainstorm. In his horror at what he'd done, he'd turned himself into the Alliance, with a death wish.

When Layel is brought in to help a falling Angel remain Pure, he isn't ready for Nathaniel. Helping an Angel rise is nearly impossible, but they're attraction to each other might make the journey even harder. 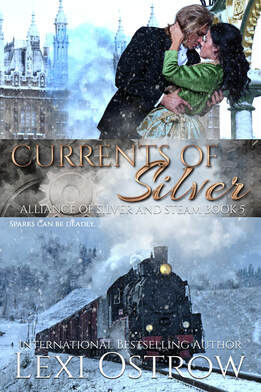 
Clara Burrowes owes the Alliance of Silver and Steam her life. When the battle between Earth and Hell broke out, she was saved from death by her worst nightmare, a hunter. In repayment, she works as both a hunter and an inventor's assistant. It didn't take long before she grew to love her work and even humans.

Hugo Clark was assistant to Nikola Tesla when they traveled to British court, and the King made him an offer to see technology beyond his wildest imagination. Without hesitation, Hugo abandoned his work with Tesla and joined the Alliance. Demons didn't frighten him if he could work with such amazing tools.

When Hugo and Clara met attraction stemmed from more than just her Succubus talents. The pair worked as well together in the labs as they did between the sheets. Wishing to find a way to illuminate the Christmas holiday, their tinkering led to danger. An electrical current wakes a sleeping demon that even the Alliance isn't prepared to stop. They'll have to rely on Hugo's brains and Clara's demon talents if they want to keep the city safe. 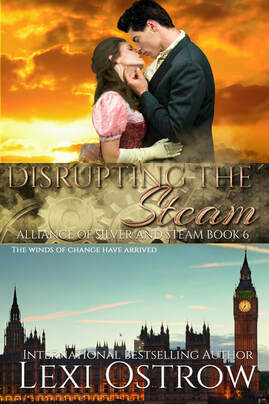 
The end is coming.